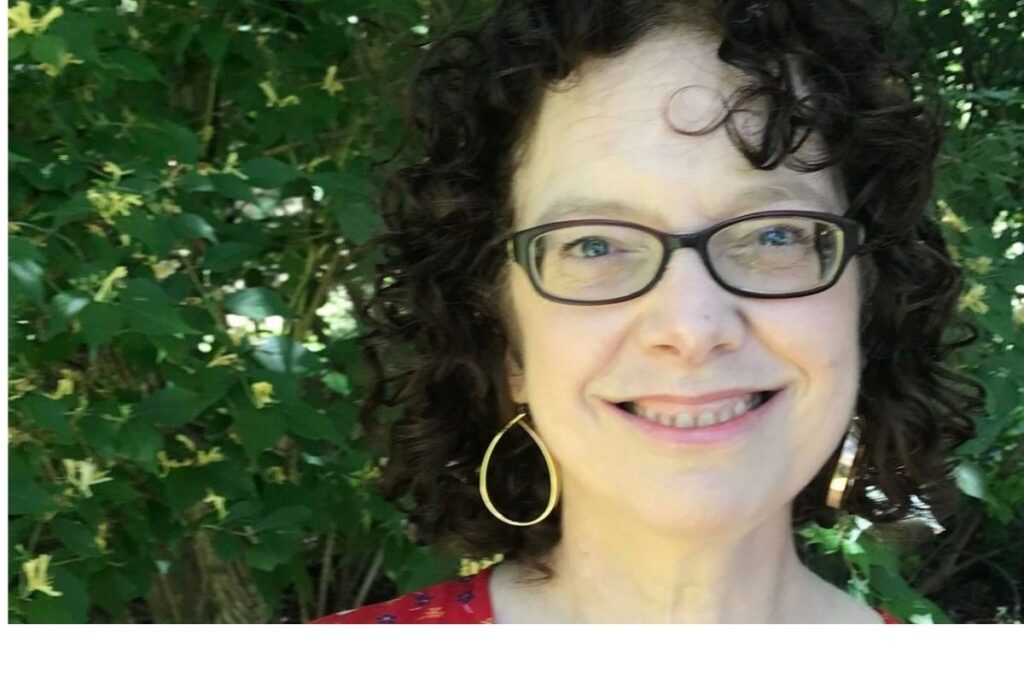 Do you cringe when an economist or policy wonk quantifies the value of a single child’s education? I do. How can you reduce the immeasurable worth of access to high-quality schools to dollars? Isn’t that kind of crass?

Yet I recognize we do this all the time. How else can state leaders propose budgets (as Gov. Phil Murphy did Tuesday) without allocating a specific amount of dollars for each district and student? In fact, that’s what New Jersey’s highly-praised school funding formula does: calculates the amount of money needed to “adequately” educate each child. And, with New Jersey property tax situation — we pay more than any other state, mostly for school funding–it’s not craven to wonder whether our money is wisely spent for students’ maximal benefit. (NJ, after all, is the poster child for school spending profligacy: Example, Asbury Park, which last year spent $42K per child for dismal results.)

And so I put aside my unease and read a new report called “Making it Count: The Productivity of Public Charter Schools in Seven U.S. Cities,” one of which is Camden. The researchers analyze the “Return on Investment,” or “ROI,” in these cities to determine whether traditional schools (TPS) or public charter schools give students the greater “bang for their buck.” (Achievement is weighted for disability, poverty, and English Language Learners.)

To calculate the ROI in comparisons of traditional schools’ and charter schools’ value to students, families, and society, the researchers use outcomes on NAEP tests  (National Assessment of Educational Progress tests, considered the “gold standard” for measuring student academic growth) and “recent rigorous evaluations of charter schooling effects by Stanford University’s Center for Research on Educational Outcomes.” (See my summary of the CREDO results here.)

Our analysis compares the productivity of different organizations providing a similar service — in this case, public education. Cost-effectiveness is the efficacy of a program in achieving given intervention outcomes in relation to the program costs…We determine how much money is invested in public charter schools and TPS, what levels of student achievement are attained across the two public school sectors, and how much economic payoff our society can expect to receive as a result of the educational investments in each sector.

The results are startling in Camden City.* (They’re also timely because local teacher union leaders have declared war on the charter school sector.) The analysts find that for every thousand dollars spent on public education in Camden, the city’s charter schools “demonstrate the highest advantage among [all seven] cities in student reading achievement gains compared to their TPS counterparts…At the same time, Camden charter schools have the largest funding gap among the seven cities, as their public charter schools are funded around 45 percent below the funding rate for their local TPS.”

That’s higher than any of the other six cities studied. Here are some of the results, first in reading and then in math: 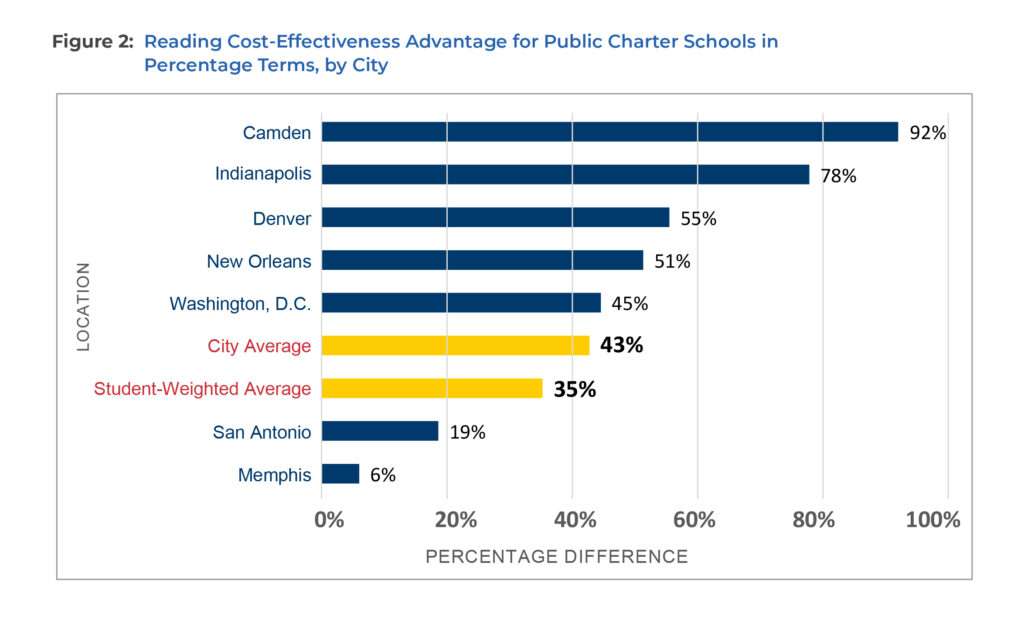 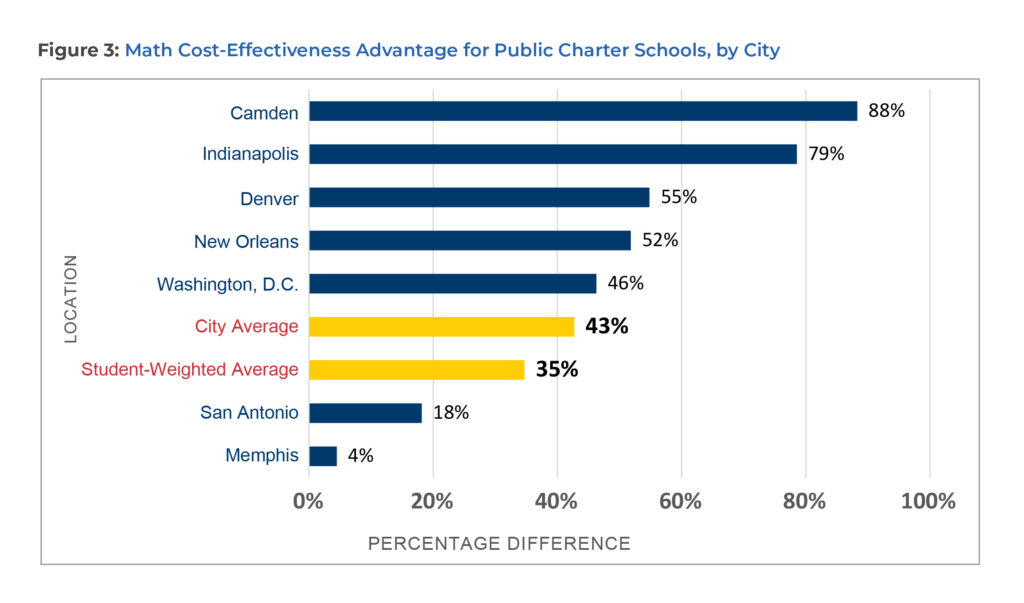 Impressive, right? If your public school choices were limited to Camden City, where would you send your child?

Sure, my stomach rolls at the idea of converting students into dollar signs. Yet I’m thinking of a line from Carl Golden’s column yesterday in NJ Spotlight about Murphy’s budget address. In musing on the absence of the typical Statehouse scene of “political cognoscenti rubb[ing] elbows with policy wonks despite different agendas” due to COVID restrictions on public gatherings, he comes up with this gem: “It’s been said the state budget is 10% a fiscal document and 90% a political document.  One can argue with the ratio, but the politics-driven as well as the policy-driven understand the underlying truth in that observation and approach it with that firmly in mind.”

That’s true of school budgets too: they are political documents and reflect a specific Administration’s calculus, especially during an election year. Let’s go from the very general to the very specific.

General: Gov. Murphy, as any politician would, has started campaigning for a second term, with voters casting ballots in November–various pundits say that’s why there are no tax increases in the 2022 proposed budget. (Some argue there are hidden increases because last year the state borrowed $4.3 billion plus interest to pay for COVID expenses that it didn’t use up but Murphy is rolling the remainder into this year’s operating expenses; in order to maintain that level of spending, he’ll have to raise taxes in FY2023.)

Specific: Gov. Murphy relies on NJEA, the state teacher union, for financial support (it is the major funder of his PAC) and, protestations aside, leaders see public charters as a threat to their market share–especially in Camden, where over 55% of students attend charter and renaissance schools.

Camden students, disproportionately low-income and of color, get one shot at a public education. I vote for them. That means I vote for public charter schools.

*Sidebar: Each of the seven cities showed an increase in ROI but none at the rate of Camden. Why? One possibility: In a recent Washington Post op-ed, Jay Matthews– not a charter school fan, by the way–posits that “the best charter systems often have stronger and more consistent leadership” than traditional district schools, which enables them to “avoid the political pressures and shifting policies” of traditional schools. Matthews includes in his list of the “best charter systems” KIPP and Uncommon, which both have large presences in Camden. [Mastery does too but only has schools in Camden and Philadelphia so doesn’t make Matthews’ list.] While this study didn’t calculate student outcomes in all of Camden’s renaissance (hybrid charter-traditional) schools, it did include KIPP-Cooper Norcross Academy, Uncommon’s Camden Prep, and Mastery Schools of Camden.