ANALYSIS: Newark Superintendent León Crosses the Line As He Promotes A School Fraught With Violence 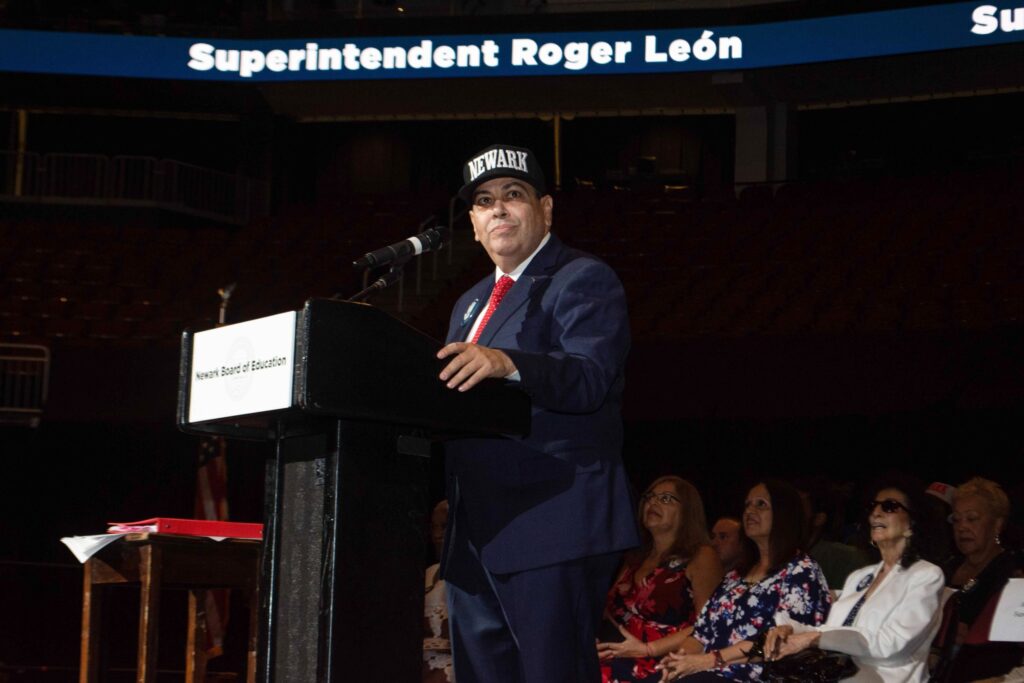 Ready for your dose of cognitive dissonance?

Yesterday at 10:39 am  Chalkbeat published an exposé of Newark’s Malcolm X Shabazz High School, describing the school’s continual violence (six times the district average) and abject failure to adequately educate students. (Nine out of ten students fail reading proficiency tests; the state withholds how many students are proficient in math “to protect student privacy” but Chalkbeat says it’s 3%. Shabazz is ranked #2192 out of NJ’s 2221 public schools.)

Yesterday at 3:10 pm Newark Public Schools District, under the direction of Superintendent Roger León, sent out a press release entitled  “Make Malcolm X Shabazz High School Your #1 Choice,” touting the school as a “premier academy” with “a rich history, currently the home of an incredible student body poised to join such greatness” and urging parents to enroll their children there.

When does boosterism become educational fraud?

León may have breached that tipping point.

Here are just a few of the facts about Shabazz meticulously documented by Chalkbeat:

What do Superintendent León and district officials say in response to the Chalkbeat article and to parents like Shanaya Thomas who disenrolled her two sons because, she told León in a email, “you can’t keep my kids safe?” From the press release:

Actually, Shabazz is trending downward as parents vote with their feet –the school is in the South Ward, where many high-performing public charters are located—and enrollment is dropping precipitously. In  2018 Shabazz’s school enrollment was 446; now it’s down to 277, with the current freshman class numbering 58 students. (The school enjoyed a brief renaissance from 2011-2015 under the leadership of Gemar Mills, dubbed the “turnaound principal,” who, after taking the helm at age 27, elevated school culture, enrollment, and student outcomes through a whole-sale education reform effort.  Mills is now Executive Director of College Achieve Paterson, a public charter network in the city where he grew up.)

León’s duplicity can’t be ascribed to ignorance. He regularly receives texts and videos from Shabazz staff and students documenting the violence. For instance, in August 2019 at a school board meeting Theresa Pringle, a mother of a Shabazz student, described the escalating violence that, she said, puts her son in “imminent danger.” The following month “three students attacked a young man at a nearby bus stop,” ending up with the boy in the hospital, and  “students fought or were attacked in stairwells, hallways, and locker rooms, according to incident reports and videos.” One student “flung a laptop at a classmate’s face, sending him to the hospital. On at least two occasions, security guards had to seek medical care.” When pressed at December’s school board meeting to explain his strategy for improving Shabazz (which he refuses to close) León pointed to a plan to train students to provide peer-to-peer counseling.

Then again, León’s mendacity is not a new feature. Two years ago he tried to get the State Department of Education to close four public charter schools by distorting facts, misconstruing data, and placing parent preference on the back burner. At the time the NJ Children’s Foundation called his accusations “misleading,”  “inaccurate,” and filled with “factual misstatements” and  “boilerplate, conclusory claims about charter schools with any evidence whatsoever.”  Even the charter-unfriendly Murphy Administration agreed, refusing to close these four popular schools.

Yet that incident hasn’t deterred León from broadcasting falsehoods that, in the end, harm Newark families by conning them into enrolling their children in dysfunctional, under-performing schools plagued by violent and strife.

Educational fraud or a tin-eared marketing attempt? You choose.