‘We Need to Shift the Way We View Teachers,’ Says New Jersey Educator: Here’s Why 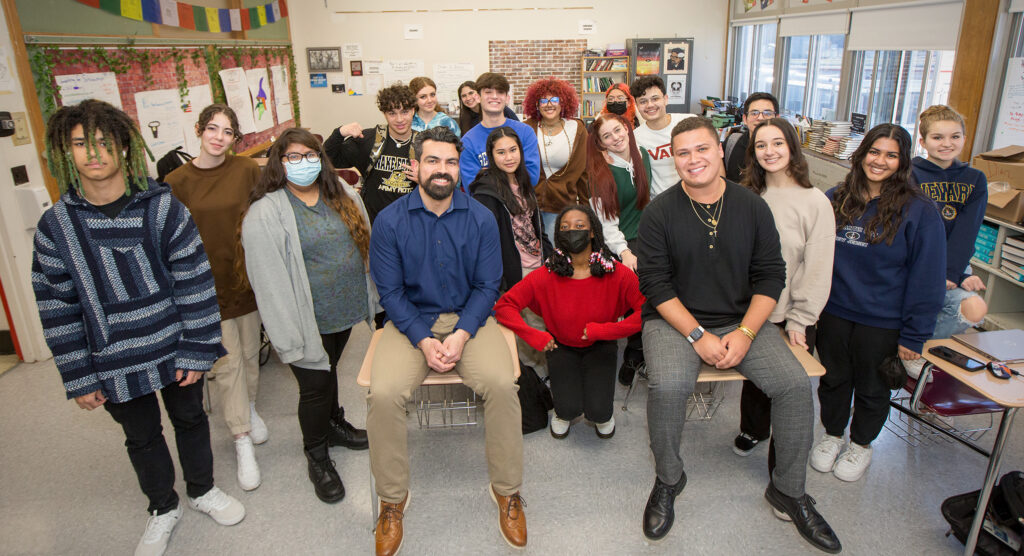 Robert Moore wrote this story for Honored, a nonprofit organization dedicated to keeping great teachers in the classroom and to inspiring a new generation of talent to pursue teaching. Andres Diaz a 2022 Honoree, teaches at Morris Hills High School; Omar Lisojo, his former student, is in college pursuing an education degree while working as a substitute teacher in his mentor’s school.

Before every English class, Andres Diaz writes a question on the board for his students to ponder. He calls it a “scribbler.”  It can be a simple question, such as: “Where do you think you will be in 10 years from now?” Or, “Who’s the most important person in your life?”

One time, the scribbler was designed to ignite animated conversation: “How would you spend exactly $86,400 if that amount was deposited in your bank account every day?” The students inevitably became excited at the thought of that much money. After the chatter of far-flung vacations and of buying cars and yachts had died down, Diaz explained that actually they do receive such a gift—not in money, it’s true, but in time. After all, there are 86,400 seconds in a day, and time is as precious as money. So how will the students choose to spend that?

In his early years, Diaz never imagined he would be a teacher. His parents had arrived from Colombia seeking opportunity and the American Dream. With no family connections to teaching, it never occurred to young Diaz that he had the patience or the talent to command the rapt attention of teenagers. Now aged 36, Diaz’s students and fellow teachers at Morris Hills High School in Rockaway, New Jersey, are happy that despite his initial reservations, he has truly found his calling.

In part, he was inspired by a college English literature class he had strolled into almost by accident. “It was mesmerizing, and the professor was a true Renaissance man—sophisticated, eloquent, and well-traveled.” Diaz thought to himself that he wanted such a career. He then met—once again by chance—the superintendent of schools in Rockaway. Dr. Gary Vitta was a passionate advocate for the profession. He took Diaz under his wing and encouraged him to pursue his teacher certification.  Quickly, Diaz found his place in the classroom—and on the wrestling mat and on the soccer field as a beloved coach. He soon realized that he had stumbled on the perfect vocation: Influencing a culturally diverse group of children with creativity and imagination. More than that, not just teaching the kids but learning from them. And that desire to learn lives on. “I still gain more from my students than I teach them.”

Omar Lisojo is a former student whose trajectory was completely changed by his interactions with Diaz. Lisojo, now aged 22, has decided he wants to follow his mentor into the classroom and is graduating from Montclair State University later this year. He is already a substitute teacher at Morris Hills High School, following the same path as Diaz. 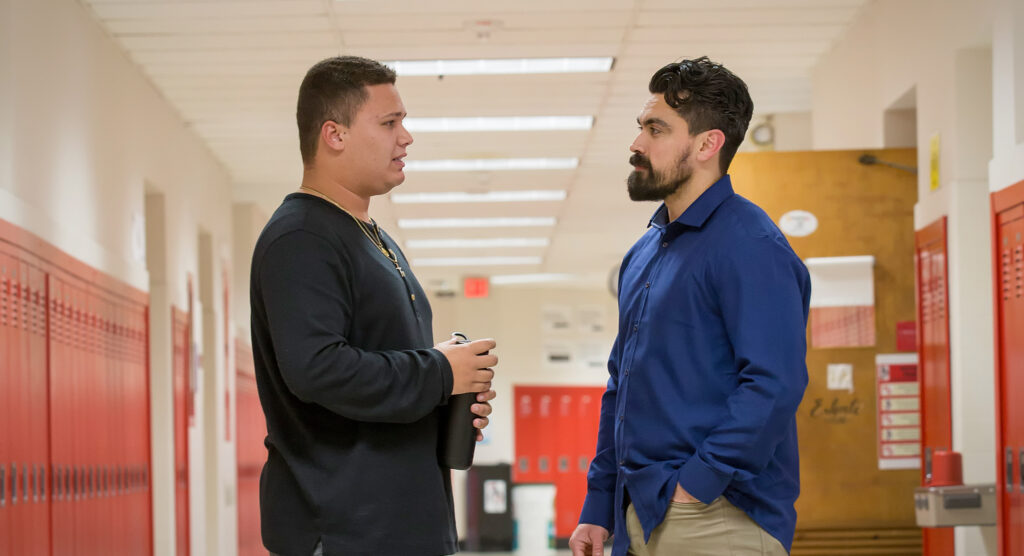 Diaz has a simple style of teaching anchored in an open-door policy and understanding that students learn best if they see the classroom as a safe space. “Sometimes,” Diaz says, “I just ask a student, ‘How’s life? What’s going on?’ I don’t push them. I just want the student to know I’m there for them. I focus on the relationship.” If he notices a kid is struggling, “I then just sit with them—no pressure—and the message is, ‘I care about you, and I want to help you.’ It’s amazing how often an event at home is stopping them from learning.”

It’s how Diaz and Lisojo forged their bond, simply by sitting in the classroom over lunch and talking. At first Lisojo was tentative, feeling he was imposing on his teacher’s lunch break. Diaz convinced Lisojo that it was fine to drop by to just chat about anything—just to see where the conversation led. “I see so much of myself in him,” Lisojo now says. “He’s a Hispanic educator, so we have a shared heritage, and like me he loves English and values friendship.”

Diaz has a teaching philosophy that seeks to engage his students where they can gain the most, even after they’ve left school. Working with his students on a text isn’t just about exploring a particular book or poem; it’s about teaching the value of perspective. “What a great book does is it allows you to walk in someone else’s shoes,” says Diaz. “And that’s universal. That has value. It doesn’t matter if you want to be a professor or a mechanic.  A book has a perspective from which you can learn.”

At a recent class, Jennifer Toriello, the school’s Director of Instructional Services, dropped by to watch Diaz. She was bowled over. “He was teaching sonnets. Yes, Elizabethan sonnets! It was wonderful. The kids were hooked. Somehow, he had made it cool. I haven’t seen a teacher do that before. I’m so proud of him; he pours his heart and soul into the classroom.”  There is something else Toriello notices about Diaz: “He’s not just passionate about what he does. He is always looking to improve, and he has this approachable demeanor that creates a comfortable classroom environment that reaches the kids.”

The exceptional bonds that Diaz forges reach beyond the classroom and into his students’ lives. That became clear to Lisojo two years ago when he lost his beloved grandmother to Covid. As he wondered who he wanted at the memorial service to celebrate his grandma’s life, one person—someone who had shaped his life—came straight to mind. And that day as the Lisojo family came together, Diaz was at Lisojo’s side. If a student needed support, of course Diaz would be there. And so amid a deadly pandemic that was causing havoc to student and teacher routines alike, Diaz could think of nothing more natural than being there for his former student. As Lisojo recalls that moment, “I saw Mr. Diaz join the celebration-of-life for my grandmother, and it brought me solace and calm at a time of grief and anxiety.”

A year later, it was Diaz’s turn to suffer from the cruelty of the virus stalking the world. He lost his 62-year-old father to Covid. Then just a few weeks ago, his stepfather succumbed to a long battle with leukemia. Dealing with his own loss has only reinforced his empathetic teaching philosophy. “Family is so important. Loss is such a knock to your soul. It teaches you that you have to be there for others. I wear my heart on my sleeve, and I don’t mind if a student sees me cry.”

Losing two father figures within a year has inevitably led to a period of reflection for Diaz. Much of it has focused on the role of being an educator in society and on the importance of communication in the classroom. “I think that teachers are some of the most important people in society. A good teacher genuinely cares about the student in front of them, and that simple act of caring can cause unimaginable growth in a young student. There needs to be a shift in the way we view teachers,” Diaz says.  “They are noble people. Any good teacher knows that the day doesn’t end when the final bell rings to dismiss the class. We do it because we care.”

Diaz worries about the stresses buffeting this new generation of students. “The challenges and anxieties of the formative years can be heavy and being a student isn’t easy. Then add today’s social media into the mix and you’ve a concoction of pressures that are so difficult to deal with. Students would greatly benefit from an education that focuses more on the core pieces of being a human.”

In his nomination of Diaz for the Honored National Teaching Award, Lisojo wrote: “Thank you for being an amazing teacher and now a lifelong mentor.  If I can be half the teacher you are, I’d consider myself the luckiest person in the world.” In mid-March, in a moment of special symmetry, Lisojo was the substitute teacher in the class of his mentor. Lisojo asked for advice. Diaz replied, “It’s your class. You decide what to teach.”

That morning, Lisojo began writing a question on the classroom board just before the students arrived for the English lesson, recalling a class he had attended a few years ago. 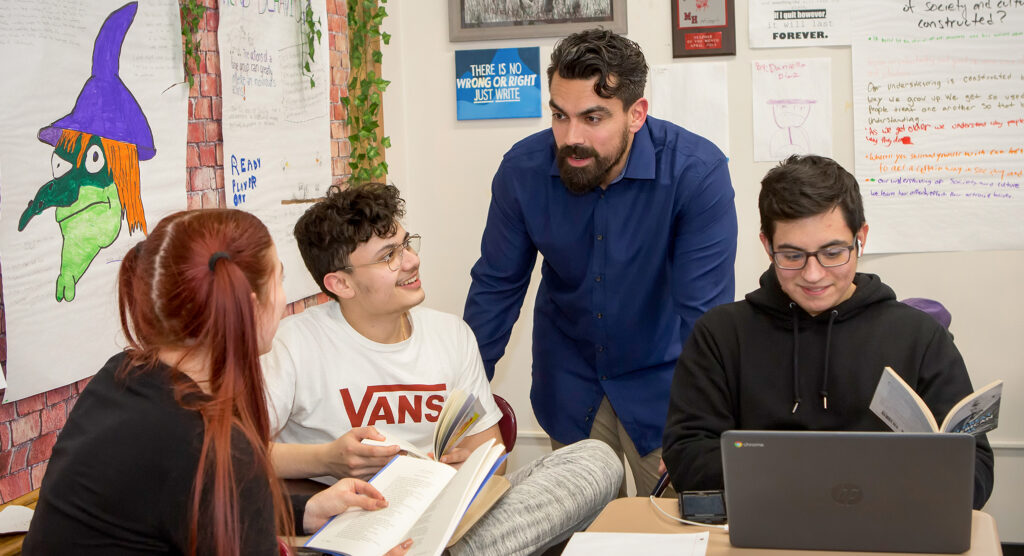 Corrado Blasts Murphy Administration for Continuing to Cover Up the