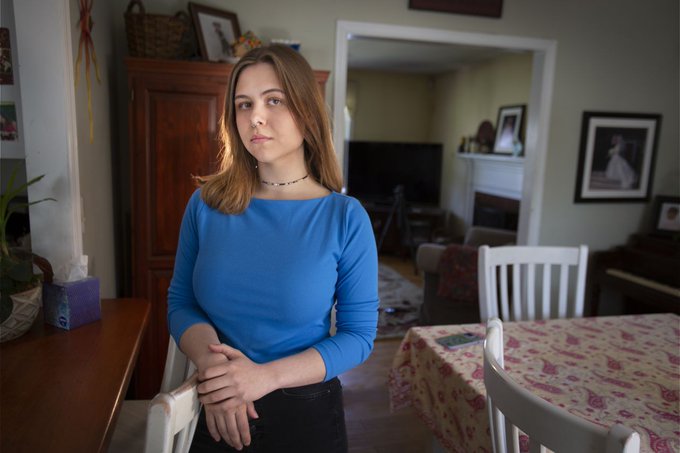 Sara Stillitano, a 19-year-old high school senior, has filed a $10 million lawsuit against Hopewell Valley Public Schools District (Mercer County) and Mark Amanti, her former middle school teacher and lacrosse coach. She charges that in 2016, when she was 13 years old, Amantia drugged her and watched while another man sexually assaulted her. In addition, her teacher assaulted her on school grounds of the district’s Timberlane Middle School multiple times. Each time she told staff members but no action was taken.

In 2019 Stillitano filed a tort claim, notifying the district of her plan to sue, and remained anonymous. Now Stillitano has asked that her real name be used.

According to court documents and an interview in Advance Media, she endured “years of unwanted backrubs, inappropriate comments and eventually sexual assault from her eighth-grade teacher as he locked her in a classroom, pushed her against a wall and exposed himself. She said she only escaped by stabbing him with a pencil.” Other girls were also subjected to “inappropriate contact” from Amantia “during class, in the hallways and in the lunchroom, all in full view of other students and faculty.” In regards to the incident when she was 13 years old,

Stillitano recalled being dizzy and confused as she was assisted to the second floor [of a Trenton rowhouse to drop off gifts for charity]. She remembers seeing a bed; it had a metal headboard. A small camera sat on a tripod at the foot of the bed. Two men she had never seen before were there, and she claims in her lawsuit that one of them sexually assaulted her while Amantia and the other man watched.

In the lawsuit, two other former students said they had been “inappropriately touched” by Amantia and a third student said she saw this happen.

Eric Harrison, a lawyer representing both the district and Amantia, said, “as much as Mark would like to respond to these outlandish allegations in the press, I have told him that he must not do so outside of the legal process.”

According to Stillitano, she reported the incidents four times to a school guidance counselor, identified in the tort claim as Mrs. Fertig. In a conversation between Fertig and Stillitano’s mother, Fertig referred to Amantia as “a friendly teacher who made Student S. a little uncomfortable.”

In 2019 she filed the tort claim and included additional information. In response, the Hopewell Valley Board of Education ordered an investigation, which was conducted by the state Division of Child Protection & Permanency and the Mercer County Prosecutor’s Office. No evidence of wrong-doing was found. During the investigation, Amantia was suspended for three months. He is currently a tenured staff member in Hopewell working as a “technology trainer.”

Stillitano said when her younger sister moved up to Timberlane Middle School from elementary school, she worried about her sister’s safety and began to “experience unwanted memories.”  She finally told her parents the full story and they went to her new guidance counselor Rachel Curran and the high school vice principal Tricia Pinelli, who both promptly reported the alleged abuse to the district Central Office.

Stillitano’s memories include one particular incident described by attorney John Rue in the  2019 letter to the district outlining the charges:

“In the Spring of 2017, Amantia’s disturbing behavior reached new depths of depravity. One afternoon when Student S. stayed after school, Amantia approached and asked Student S. to accompany him to his classroom. Student S. did not want to go, but acquiesced to Amantia’s authority. When they were both inside the classroom, Amantia locked the door and covered the window with the “lock down” cover. To Student S.’s shock and disgust, Amantia pulled down his pants, thereby exposing his genitalia. Once Student S. realized what was happening, she froze in panic. Subsequently, Amantia pushed Student S. against the wall, and in an effort to escape his grasp, she tried to slide down it. Determined to complete his assault, Amantia moved down the wall with her, preventing Student S. from moving, while pulling down the waistband of Student S.’s pants as she struggled to keep them up and cover herself in a state of terror and humiliation. Utterly horrified and seeing no other way out, Student S. stabbed Amantia in the arm with a pencil and managed to flee the room. As a coping mechanism, Student S. repressed her memories of the attack (and the entirety of the harassment and abuse).”

Also from the tort claim letter:

“The Parents were outraged that Student S. had suffered egregious abuse at the hands of a teacher in whose care she had been entrusted. But they were also shocked that, despite the open and notorious nature of the abusive conduct, no one at the school had intervened on Student S.’s behalf. Therefore, they began their own investigation, and what they found was almost beyond belief. While Ms. Fertig had told her superiors about Student S.’s allegations, the administration failed to take any action whatsoever. Specifically, when the Parents asked Superintendent Dr. Tom Smith why nothing had been done when Student S. initially made the allegations, he stated that he did not know, that there was likely ‘not enough information,’ and claimed an investigation into the events would begin. Throughout the Parents’ meetings with various administrators, it quickly became evident that those with knowledge of the abuse did not take it seriously (or attempted to sweep the allegations ‘under the rug’), and opted to ignore Student S.’s claims entirely. The latter was underscored during a meeting between Student S. and Dr. Smith, who stopped Student S. in mid-recitation of the abuse, claiming that she was providing too much detail.”

After four years of therapy, Stillitano will attend college in September. In an email to Advance Media, she wrote,

Many levels of various institutions have failed students for decades when it comes to sexual abuse in Hopewell Valley School District. I hope to shine a light on the injustices that have occurred and the far-reaching consequences that those injustices have had on children and their families over the years.