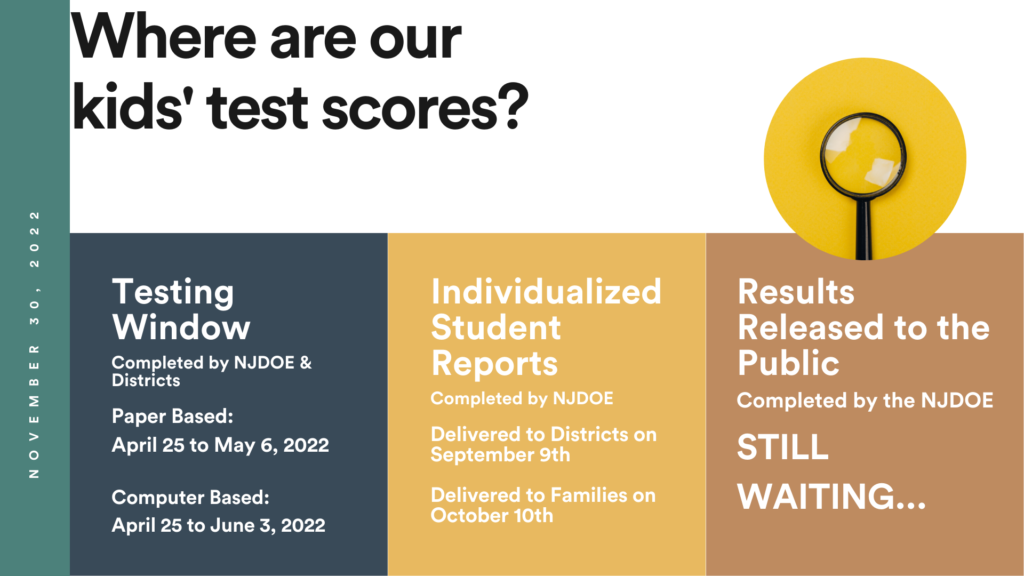 When someone stands up and says New Jersey schools are #1 I have an immediate reaction to vomit because I know that’s not true.

That’s Senate Majority Leader Teresa Ruiz during last night’s remarkable forum called “Where Are Our Kids’ Test Scores? The Importance of Tracking and Addressing Learning Loss in New Jersey.” During the ninety-minute, highly-attended discussion (you can watch it here), Moderator Paula White, CEO of JerseyCAN, honed in on a consensus among among the panel: Gov. Murphy’s Education Department (DOE) is failing in its mission to “strengthen teaching and learning in the state” by 1) concealing important information about student learning loss; 2) declining to create what Senator Vin Gopal, Chair of the Senate Education Committee, calls “a long-term strategic plan” that would help districts allocate the $2.8 billion in federal emergency school aid while being accountable to the public; 3) allowing lobbyists’ propaganda (like “our schools are #1”) to veil the stark disparities among schools that leave some students without the necessary skills to attend college or get jobs after high school.

As Sen. Ruiz said, “the number one question is in New Jersey is ‘where are we?’ The answer is ‘we don’t know.’ Or, as White refined the remark, “the danger of saying we’re #1 is that there are huge achievement gaps within that data set.”

NJ Ed Report has extensively covered the DOE’s refusal to release last spring’s state test scores, unlike 48 other states in the nation and despite State Board members’ pleas for transparency. Reportedly Acting Education Commissioner Angelica Allen-McMillan will give a presentation on the test scores at next Wednesday’s State Board meeting but it’s unclear whether she and her staff will look closely at achievement gaps, compare the scores to NAEP data (the “Nation’s Report Card,” very important context; see charts below), or discuss any strategies for overseeing districts’ spending of pandemic aid and whether they’re meeting the needs of students.

Or, as Politico reported today,

The DOE has come under fire from advocates, lawmakers and parents for not yet releasing statewide standardized test results from last spring or any kind of cohesive statewide plan to help students recover educationally from the pandemic.

There was much disdain expressed towards NJEA executives’ sentiment, recently expressed by President Sean Spiller, that  “New Jersey’s public schools are the best in the nation” and Gov. Murphy’s echo, “New Jerseyans can proudly call ourselves home to the very best public education system in the entire nation.” (There’s a sense in which Gov. Murphy is the familiar of state teachers union leaders, a servile household attendant who echoes their words and does their bidding.)

“When you hear the data about NJ having the best schools,” said Cox Fraser, “you have a sinking feeling because of how many kids are left behind. We’ve got to be courageous and take the blinders off.”

Panelists noted that NJ’s already stark achievement gaps, according to recent NAEP data, widened considerably since the onset of the pandemic: the gaps in grade-level proficiency in math between white and Black students in the state is a jaw-dropping 42 points. 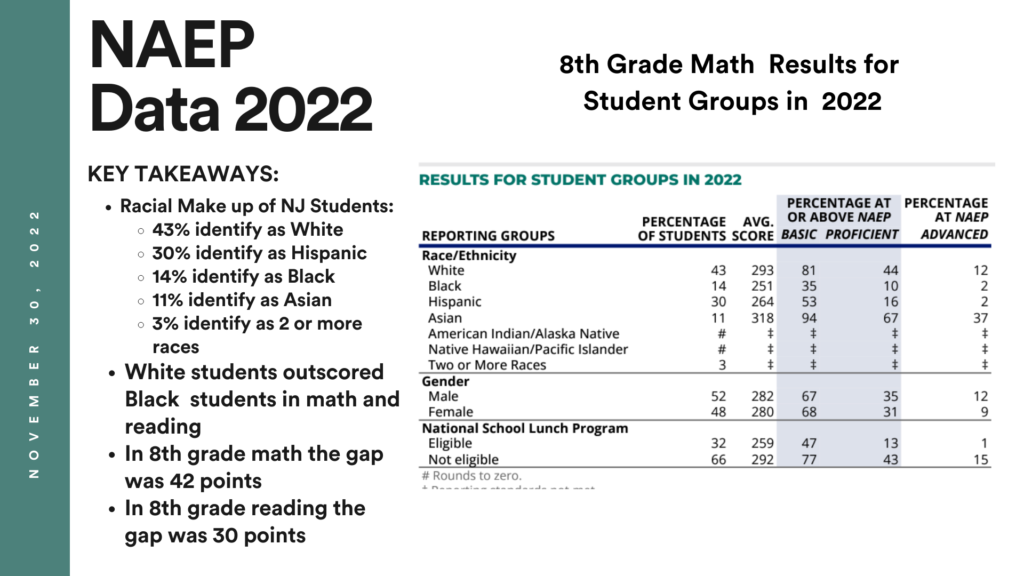 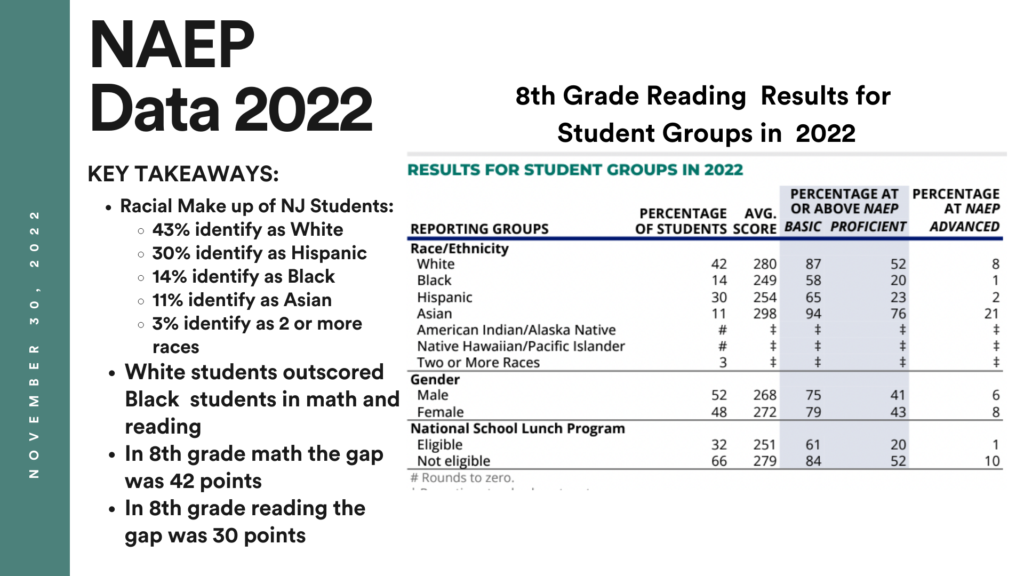 All panelists agreed the DOE needs to stop being afraid of data from test scores. Gopal: “Data can guide our response to the pandemic. We shouldn’t be afraid of the data.” White: ”We have individual student reports but we don’t have the big picture: how did districts do, how did subgroups do… In order to do that we need a comprehensive data set, which we don’t have.” Ruiz: “For whatever reason, the numbers have not been published [by the DOE]. It has been very late.” Cox Fraser: “What gets measured gets done. We have to demand it.  We’ve got to be courageous, take the blinders off. I want that glaring data to show up…so children can be successful.” Davis: “We need a statewide collective approach to how quickly we can access an array of data so we can lift all boats…We need accurate and accessible data. Why it might be abysmal, we want to suspend judgement.” Emigholz: “We can’t find the employees we need. If we have the data, if we have the transparency, we can move forward. Data is powerful.”

“We shouldn’t ignore things that aren’t looking good,” Gopal said. “There’s going to be achievement gaps that we need to close. … The data can guide our response to the pandemic and help ensure we’re providing the necessary support to both students and educators.”

Everyone saluted the extraordinary and valiant work of NJ teachers who, as Sen. Gopal said, are “doing God’s work.” Tests are not punitive, panelists agreed, but a “checkpoint” so teachers can work most effectively with students.

And everyone agreed the DOE needs a reboot. “It needs to be a think tank, not a bureaucracy,” suggested Ruiz. “During the pandemic we saw all the heads of state gather together every day to save lives. That’s what we have to do,” harness that sense of urgency, “and we have to do it now.” The pandemic did not create learning loss, she explained, but allowed it “to bleed into zip codes” unaccustomed to ‘the summer slide’ when typically low-income children lose academic ground. Covid “lent power to the agenda of what we’ve been screaming, that we’ve not been doing enough. Let’s get outside of the pandemic frame because the achievement gap has been going on in New Jersey for an eternity. Why are we not having courageous conversations? This is why the data matters.”

Sen. Gopal said, “I’d like to see the state look at a long-term strategy across our districts, charters, parochials, like a town that has a master plan.” He gave an example: “When we looked at charter schools under Christie there was very aggressive expansion. Under Murphy we have the opposite. That doesn’t seem very strategic to me. When schools are doing well they should be rewarded whether they’re charter of district. I’d like to see us do an aggressive strategy across the board and [have] a statewide approach [to improving schools], especially with that one-time federal funding. It’s time for a full-court press.” Emigholz agreed: “I would love to see the Legislature make sure we’re accountable for these one-time funds. I worry we haven’t seen the plan we all want.” Ruiz: “Without the data that money is going to other places,” rather than where it’s needed.

The DOE has not responded to requests for comment.

In “How Unions Work”