Is Newark’s School Board Taking Lessons from Asbury Park as It Dismisses Parent Voices and the Rule of Law? 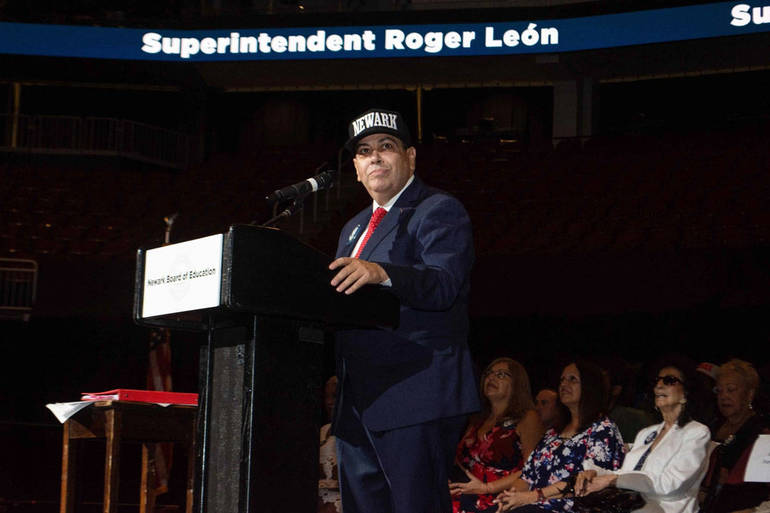 It’s only now, eight months after the clandestine agreement, that we’re finding out Leon will be making $290,500 a year plus generous benefits for the next five years.  Newark families and advocates are not happy. The National Parents Union tweeted,

Only 13% of Newark students are proficient in math and the superintendent is awarded a new contract worth more than $1.4 million. Parents of Newark deserve answers. What else is the district hiding from them? https://t.co/Tmx2pAEZ9v

Of course, school boards making deals behind closed doors isn’t new: just look at Asbury Park, where the  local school board hired Rashawn Adams as its new superintendent without bothering to interview anyone else (and after paying the NJ School Boards Association to do a national search), despite fierce opposition from teachers and parents. Also, they hired him without any public notice, just like in Newark. Why would they do such a thing? Because former Asbury Park Superintendent Lamont Repollet (who left to be Gov. Murphy’s Education Commissioner and is now president of Kean University) told them to—he and Adams go way back— even though student outcomes are below water while teachers and parents demand higher standards.

In this way Newark is a macrocosm of Asbury Park, with its profligacy, inattention to student achievement, and deafness to community outcry. Now we’ll add this to the list of similarities: it may be this sort of Asbury-esque back-door politicking infused the Newark Board’s decision to secretly extend Leon’s contract: after all, he’s pals with Senate Majority Leader Teresa Ruiz and favored son of Newark Mayor Ras Baraka and the Murphy Administration.

So who cares, as TapInto reports, if state exam results from 2022 show that only 27% of Newark students read on grade level, only 13% can do math on grade level, and only 21% of Black children in Newark can read grade level texts while 8% can do math? Who cares if Leon is on a crusade to destroy the public charter sector, despite its multiple benefits for students and its popularity with parents?

These are ethical questions. There are also legal ones. The Star-Ledger questions “whether this job renewal is valid” and notes state statute:

The regulation says that if you extend the terms of a superintendent’s contract, you must have a 30-day notice period for the public to give input. ‘The board shall also hold a public hearing and shall not take any action on the matter until the hearing has been held,’ it states.

It’s not too late for Newark school board members to do the right thing. They have until January 31st to open up the contract renewal to public comment since this is, says Tapinto, “the statutory date by which the superintendent would have to be informed about his future with the district. If the Board doesn’t act by that date with a non-renewal notice, then the Superintendent, by state regulation, is automatically renewed.”

Wanna place bets on the Board acting ethically?

After all, this isn’t a new wrinkle during Leon’s reign. Back in 2018, one year into Leon’s three-year contract, the Board extended his contract for an additional two years, expiring in 2023 instead of 2021.

So Leon’s happy with his $290,500 salary plus generous benefits and cost-of-living increases for the next five years. Teachers and parents? Not so much.

“This superintendent ran on transparency and on bringing some fresh air and some new light on the district, and we’re trying to hold him to the spirit of that promise,” said John Abeigon, president of the Newark Teachers Union. Abeigon said that the superintendent “said there would be transparency and that everything would be above board. And unfortunately, something went wrong.”

“Unfortunately, school boards in New Jersey, like Newark, and across the country are making these decisions and disenfranchising the students and families,” @ShirleyIrizarry said. https://t.co/JfoWZSaRye

Deborah Smith-Gregory, president of the Newark NAACP and a leader in the Alliance for Newark Public Schools, which represents students, parents and teachers, says she regularly attended board meetings last Spring but had no clue about this either. “The school board never brought it up,” she said. “They have a responsibility to be accountable to the community that elects them, to tell us what’s happening.”

“Hell no, they didn’t say anything,” said parent Denise Cole, who “says she’s very engaged in school board meetings and has put in multiple public records requests for the board’s evaluation of the superintendent’s performance, which were denied. Because they didn’t want us voicing our opinion, no; they take the community’s voice away. We have a right to hear about it and come before them and speak about it.’”

Jasmine Morrison, Newark mom and head of Unapologetic Parents, asked, “An automatic renewal on what grounds? Where are we since he was originally hired, and where are we now?”

Where are Newark families now? Stuck with a district leader who cares more about his real estate portfolio and waging war on the public charter sector than the academic well-being of 35,000 students. From the Star Ledger:

The intent is clear: The public has the right to know. That’s the bottom line, regardless of the legalese. When the governor returned control of the schools to the city, the idea was to give citizens new power to manage their district. How can they do that if the board rehires the schools chief for another five years, without them even knowing? Hannukah Gelt or Coal in Your Stocking? Checking in on